All football activities suspended until January 31st,2021.More updates to follow
11 Jan 2021
Previous Next

We are an international, amateur football club based in Brussels, Belgium. Every weekend nine teams (three women’s and six men’s) take to the pitch to defend our famous green jerseys. We pride ourselves on our fair play and showing our great spirit on and off the pitch! Not only do we get to make friends but we also discover some of the delightful and sometimes quirky places in and around Europe’s capital. Enjoy our website and if you’re interested in playing or helping out don’t hesitate to get in contact and become a member of this fantastic community.

On a beautiful day in Nossegem, FC Irlande were finally able to celebrate the winners of last season's players of the year. Before the player of the year announcements were made, the Club presented Francois Branchu with the "Club Person of the Year" Award, given to a person whose effort, dedication and went above and beyond their duties. 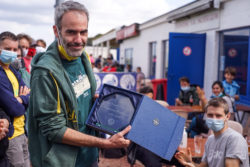 FC Irlande President Dave Verdon and Vice-President Virginie Verdin then presented Fabian Roux (in absentia) with a special award in recognition of his outstanding contribution to Ladies Football from 2014 to 2019.

Vets 1 Player of the Year In a tight race and only having won it thanks to some additional man of the match votes he got from playing with FC Irlande's First Team, the Vets 1 Player of the Season 2019 - 2020, played 14 games (6th most in the team), scored 8 goals (joint top), always makes the Vets 1 look better, and goes by the name of  Alvaro Fortun. Congratulations!

Ladies 1 Player of the Year
Ladies 1 player of the year is Olivia Philippart De Foy! Olivia’s nickname is “The Miracle”. She is always able to get out of difficult and unexpected situations. It is a pleasure not only to play with her but also to watch her play. She has excellent dribbling skills and always seems to have the perfect pass. She is an invaluable team player. Olivia logged a total of five assists and scored four goals last season. She is awarded the player of the year not just for her unique way of playing football but also for her lovable personality. 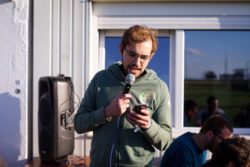 Vets 2 Player of the Year The player of the year in 2019-2020 was Neil Harnedy. Neil joined FC Irlande as a vet around 4 years ago. He was having a great first season when, in a freak accident, he broke his wrist. Recovery was long and painful and we didn't really expect him to come back to football. But in August 2019 he wrote to say that he wanted to come back. And what a comeback it was. Throughout the season, he was consistently nothing short of outstanding in defense, and opposition has been known to avoid his side of the pitch. Not happy to shine on the back of the pitch, he also supported the team up field and managed to score a goal. So a very well deserved player of the year award for Neil.

Men's First Team Player of the Year He may not be a flying Dutchman, but the FC Irlande Men's First Team player of the year Rutger "Rudy" Ophoff put in some dynamic and dominating performances in the First Team's midfield this season. A disciple of Johan Cruyff and an avid believer in Total Football, Rudy scored some crucial goals against the top teams last season and was a consistently outstanding performer throughout. A thoroughly well deserved award to the man they call "The Hurricane", who unfortunately could not be present at the event but sent a heart-warming pre-recorded video message that we all definitely listened to. 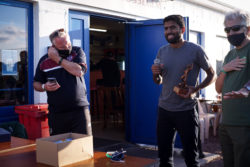 Ladies 3 Player of the Year As the girl that "only played football with her brothers", Juliette Egal joined Ladies 3 in preseason 2019. She quickly settled in and demonstrated her youthful flair, magnificent touch and thunderous shot from the very beginning. She continued to grow stronger and stronger and finished the season as the ladies' top scorer with an impressive 16 goals! An amazing number 10 that FC Irlande will dearly miss now that she is back in France. Come back soon Juju!

Men's Third Team Player of the Year
The Third Team player of the year in 2019 - 2020 was Bruno Demuylder. The Third Team could have given Bruno the award by the end of December because he was by far the best player. His contribution in defense was fundamental and helped the Third Team secure their position in 3rd division. A well deserved trophy for a great player and a great person. 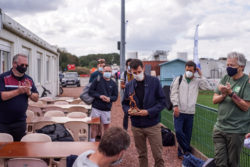 Men's Second Team Player of the Year In his maiden season for the sailors of the Second Team, Amadou Boubacar transformed a goal-shy and diminutive strike force into a formidable and physically imposing front line. With his sheer presence, his lightning speed and relentless never-give-up attitude, ABSSA second division defenders simply hated playing against him. A pathologically selfless and generous player, Amadou has a unique ability to make everyone around him better, and for that reason, and a million more, he was awarded the Second Team player of the year.

The Club will launch a Girls Football Academy at Auderghem on Monday September 7th at 5.30. More details on our Facebook Page https://www.facebook.com/groups/fcirlande

As of Monday June 1st we are still not clear  when club activities will be able to resume. It is possible that some pre season training  may be permitted to start in July but this is not certain. The date when the new  season will officially start is also not yet confirmed either although it is hoped that if there is a delay it will not be too long after the beginning of September. Further updates will be made available to the club membership when we have the go ahead from the football authorities. 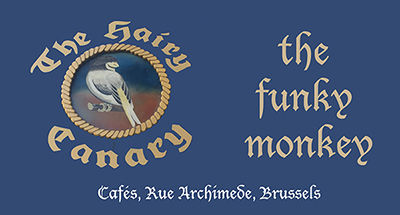 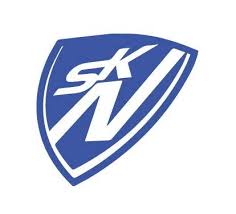 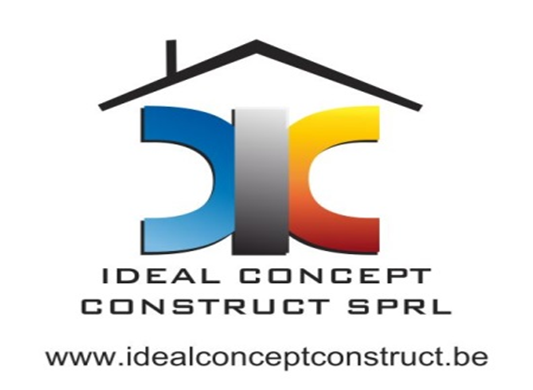 Want to join our club?

Click on the contact page above to get in touch. We are always looking for players to add to our squads and everyone is welcome to come to training to meet the players and try out.