On a calm and cool Saturday morning, the seconds had an important task in front of them to put an end to the series of losses. The pressure was on and the team got pumped up for the game by some neatly selected Black Sabbath tunes.

The game started with a rather low intensity, with some half chances for both sides, mainly from set pieces. The opposition played through the Greens’ lines with some smart one-two combinations. One of these proved fatal for Ireland, as their striker was played through with a double one-two down their right wing and finished calmly with a low strike. The first half ended with some better movements from Ireland and after a minor collision between the keeper and Amadou the former produced a racist slur, after which he was rightly sent off.

Even though the Greens had some issues with discipline in the first half, the half time helped to regain concentration. During the second half, the Greens were producing some good passing, without being enough clinical in and near the opposition box. The opposite team made their bets on parking the bus, wasting time and occasionally counter-attacking, being a man down.

The answer from the Irish did not seem to be coming, until Alex picked up a loose ball outside of the 16-yard box, controlled the ball nicely, slalomed past three defenders and guided the ball in the top-left corner. With five minutes remaining, it was the opposition that reacted and with 10 men tried to push for the winner. The goalkeeper Christian also had to step up on one occasion. It ended 1-1 and the boys in Green managed to end the losing streak, while being disappointed with not getting more out of the second half with one man up. 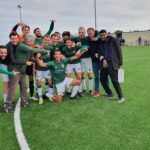 All fixtures and results